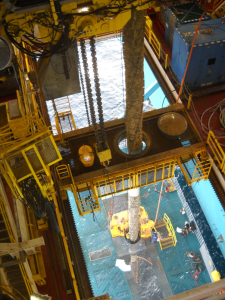 The Moonpool prior to RollSafe installation

Rigmar Services required a horizontal dropped object protection shutter to fully close off the oil rig’s ‘moonpool’ in order to prevent 50 kilo weights (dropped from 20 meters above) from falling through the moonpool onto working platforms below, thus protecting the work force on the lower deck during operations.

Tests were performed on System 2000 Groups’ existing ‘anti-ram raid shutter’ design, which System 2000 group have been producing for 20 years. The anti-ram technology was put to good use and a new shutter lath was designed and finalized after over 25 trial shapes were tested through the use of mathematical models.

Prototypes of the horizontal shutters were tested at System 2000 Groups’ manufacturing plant here in the UK, including drop tests from 20 meters.

Following these tests, a full mock-up of the final system was built on the quayside next to the rig in Dundee, where System 2000 Group worked in co-operation with Rigmar to demonstrate and conduct tests, in order to satisfy the Norwegian verification company, Det Norske Veritas (DNV), Rigmar Services and Conoco Philips (who currently rent the oil rig from Rowan Companies, Inc.). System 2000 understands the need to satisfy everyone involved in such a large scale project. The shutter surpassed all of the tests and examinations and received DNV approval, allowing the system to be used in offshore operations. 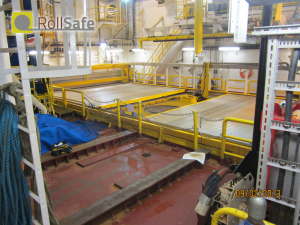 The resulting shutter provides protection to the work force while the rig is in full operation above them, allowing for 100% drilling productivity, as personnel can work safely under the ‘moonpool’ during production. In addition to this, the shutter has provided a major gain to the general working environment during production, as temperatures can drop well below freezing during night shifts in the North Sea. The shutter floor has pacified this by closing off the previously open moonpool, shutting out strong updraughts and severe weather conditions.

“System 2000 Group Ltd. managed to design, manufacture and deliver a hugely successful project within an extremely tight timeframe. We are thrilled with their ability to work under pressure and produce such a bold, innovative solution to a long standing health and safety issue within the oil and gas industry, allowing the operational ability of the rig to be maintained when personnel are working below the moonpool.”

System 2000 group were able to produce the world’s first ‘superlath’ horizontal dropped object protection shutter capable of the clients’ requirements. Patents are pending on these products and components.