RollSafe deck, a dropped object protection system developed to protect personnel and equipment working in the oil and gas industry, has recently been installed on the Rowan Viking jack-up oil rig.
The deck has been certified by Det Norske Veritas, after witnessing drop tests which concluded the RollSafe deck is capable of stopping a 25 kilo object dropped from 16 meters, with no detrimental damage to the RollSafe shutter.
Also performed was a drop test of 187 kilos from 20 meters, which was successful. 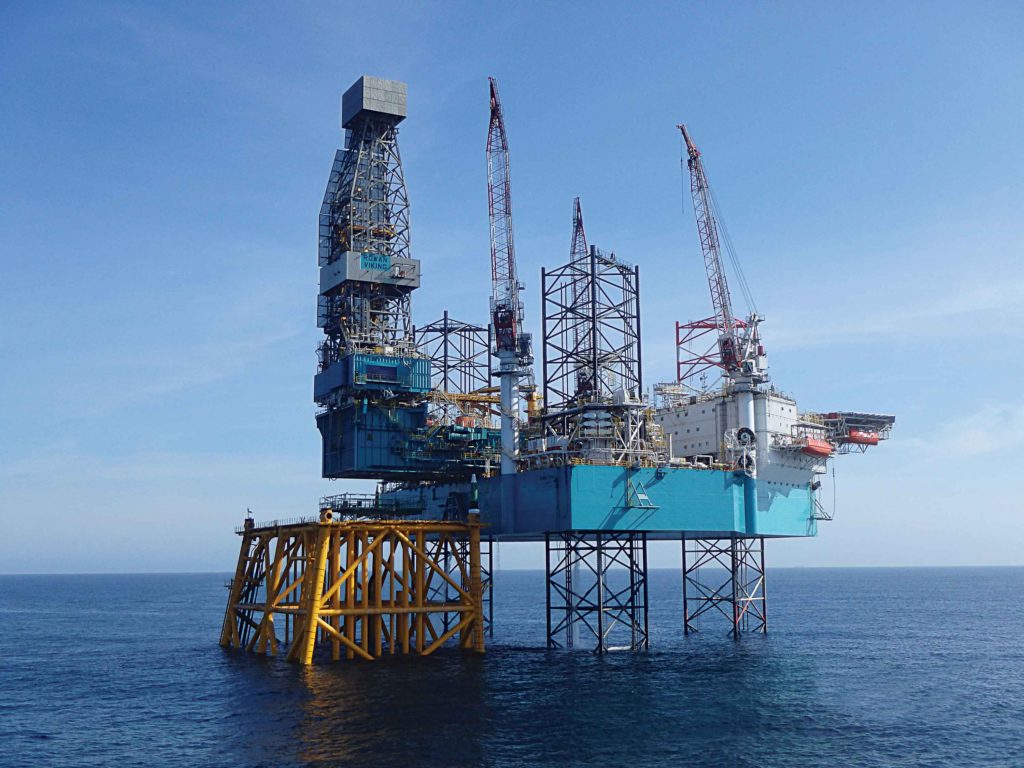 As with the installation of all RollSafe decks, System 2000 Group performed a full survey of the moon pool area prior to design, conducted offshore in the Ekofisk field in the North Sea. This helps us to design around any obstructions, such as drainage pipes, hand rails or drilling equipment. 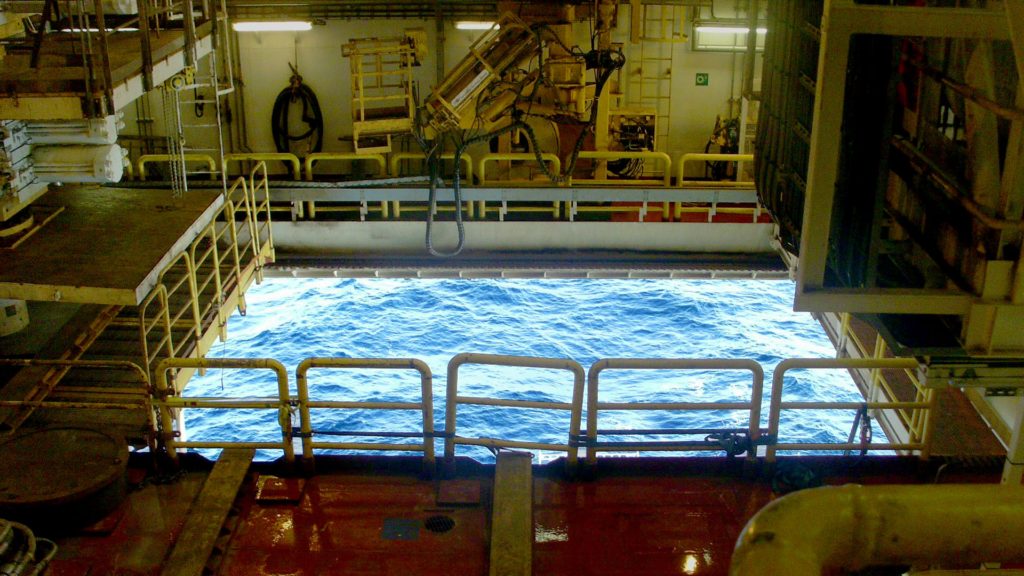 The Moonpool area, prior to installation

The RollSafe deck was manufactured at our Birmingham manufacturing base before transportation to Aberdeen and then shipping to the Rowan Viking jack-up rig. All steel framework parts were blast cleaned and coated with a 2 pack high build epoxy urethane 990 to ensure best protection from the harsh elements in the North Sea. The colour chosen was RAL 1003 to conform to rig requirements. The aluminium shutter lath were anodised to surface class 5 to further assist in corrosion resistance. Anodising increases the thickness of the oxide layer found naturally on aluminium, thus increasing resistance to harsh conditions such as sea water. 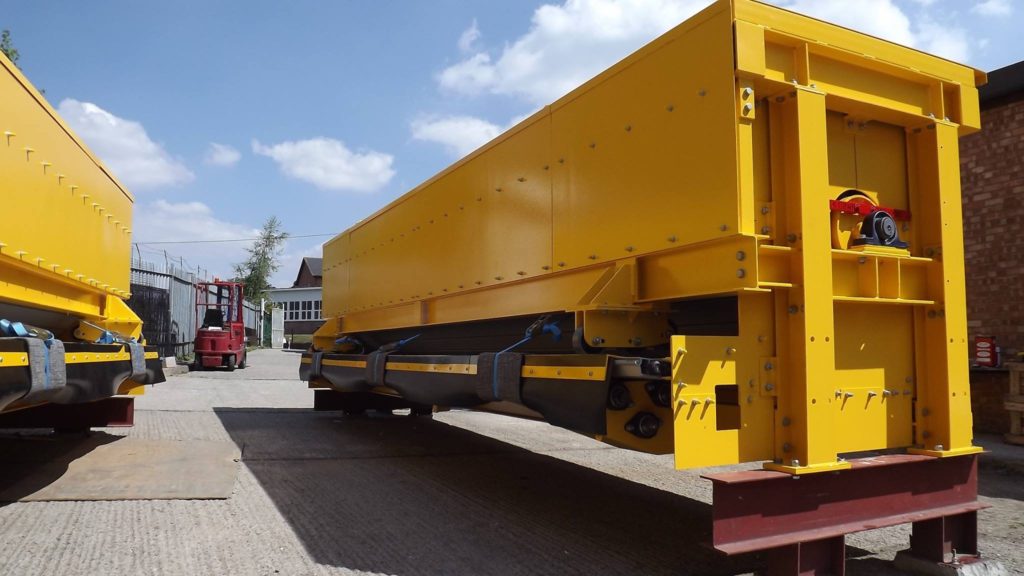 Installation of the RollSafe deck on the Rowan Viking was performed out at sea. The process was scheduled during a routine rig shutdown, so no production time was lost. System 2000 Group are able to adapt to meet the needs of the client, thus ensuring a smooth installation procedure. 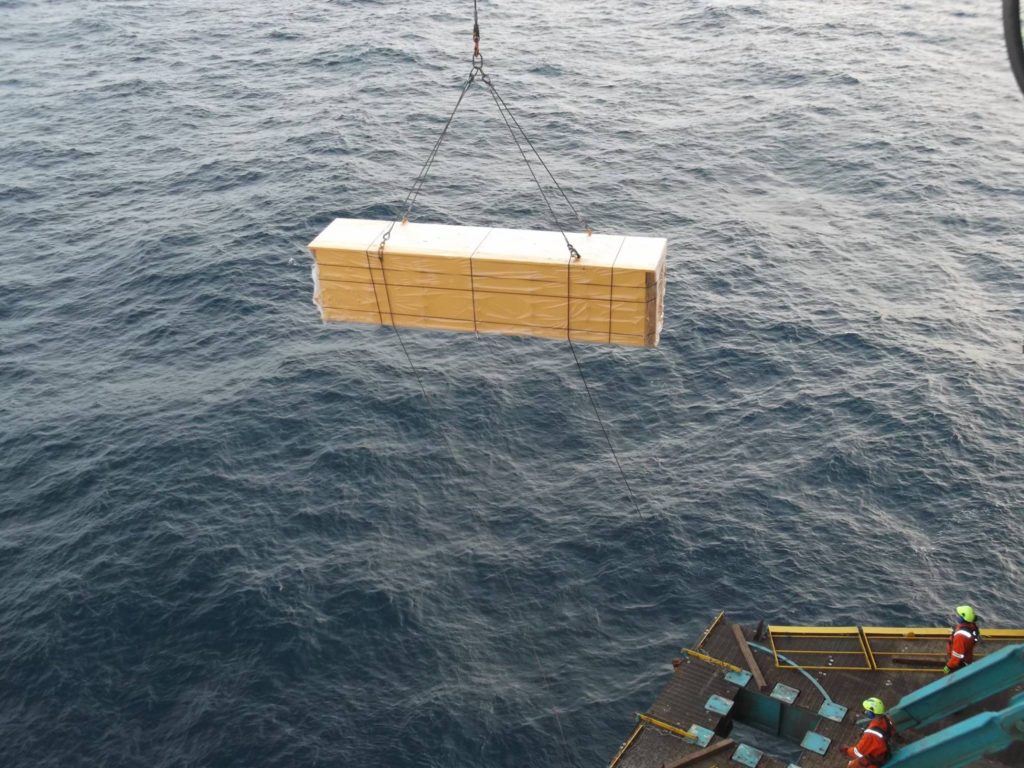 Lifting the first cassette onto the Rowan Viking 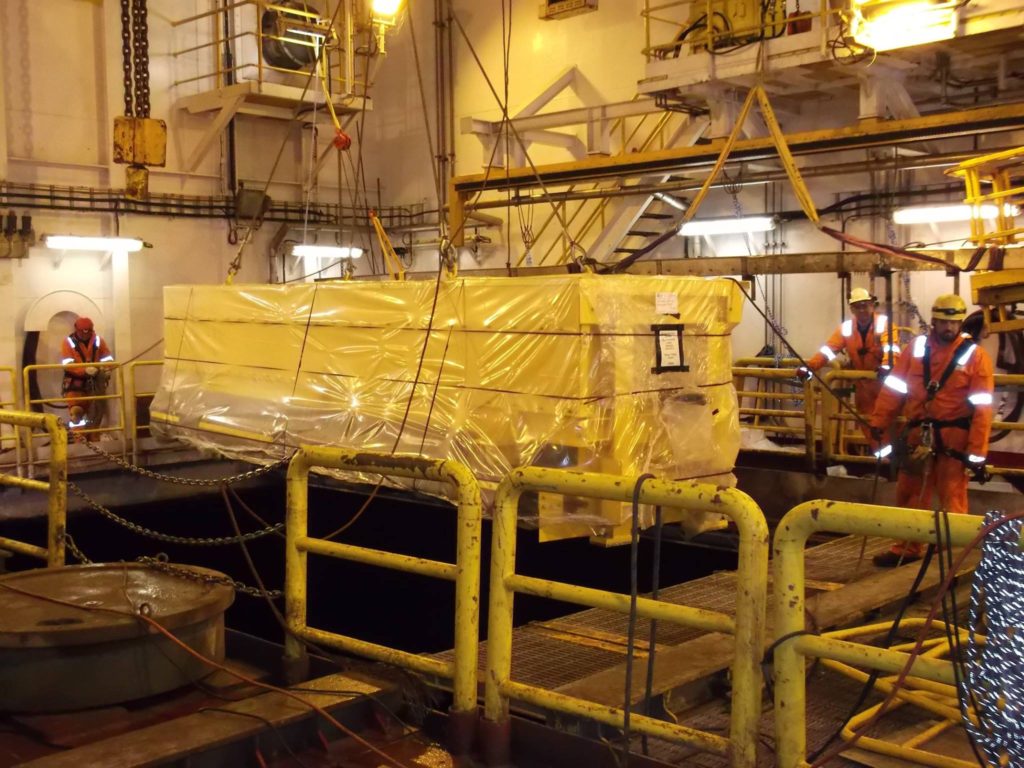 Maneuvering the first cassette into place, on board the Rowan Viking

The installation consisted of two phases – a mechanical installation which involved securing the cassette and lath guides, and later – an approved electrical installation to allow the shutter to be operated to ATEX standards. The shutter can also be wound out manually by following a set procedure. Should the electrical supply fail for any reason, the RollSafe deck can be easily deployed by one operator. 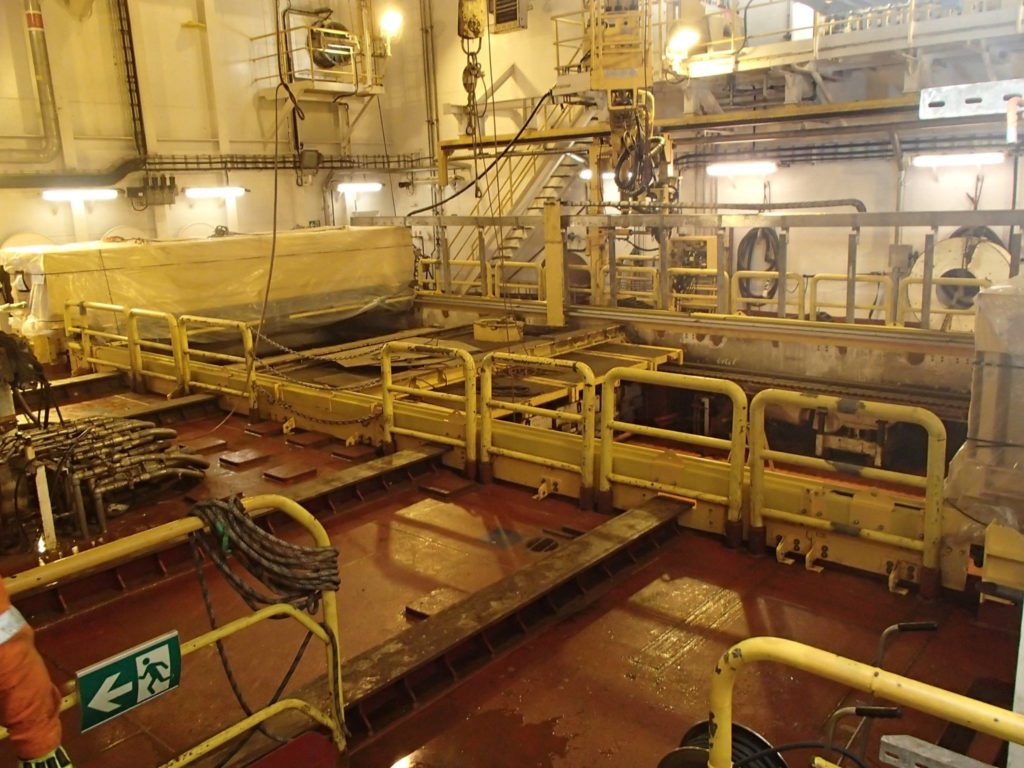 The cassettes in place ready to be secured down 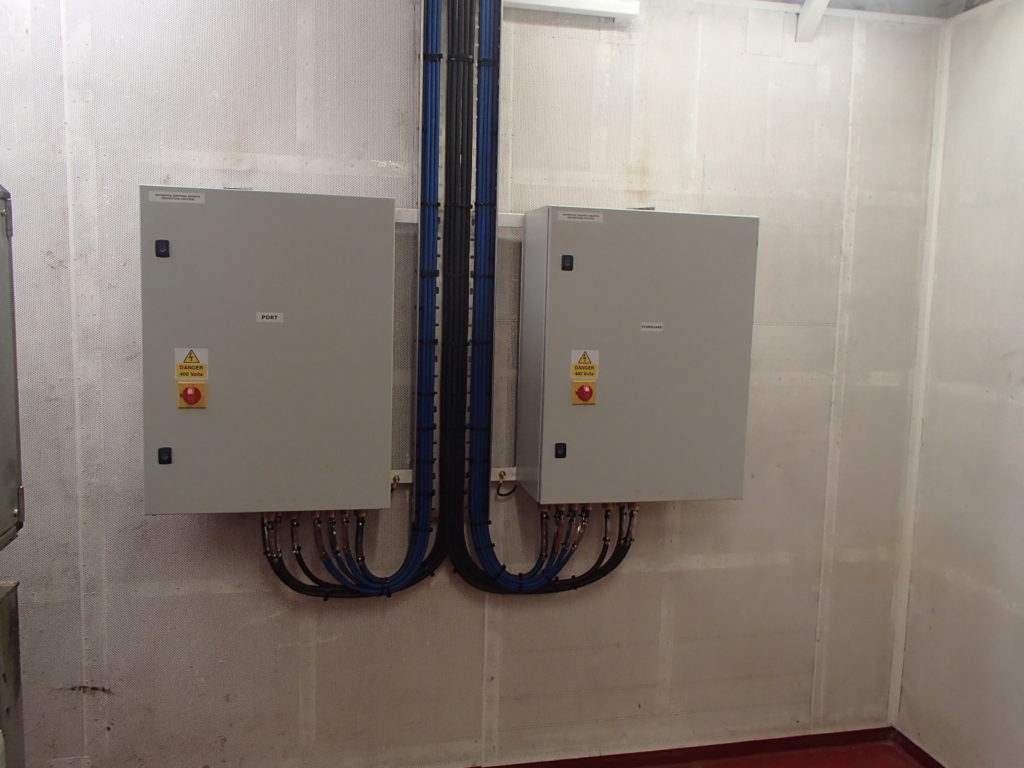 Once the installation was complete, a full testing and commissioning procedure was carried out to ensure all systems were functioning correctly. On rig training was then given to rig managers and operatives, including cleaning procedures.
Now operational, RollSafe is protecting personnel and equipment in the moonpool area of the Rowan Viking, allowing workers to operate in a safer environment. The RollSafe deck is also effective at improving the inside conditions by shutting out the harsh weather of the North Sea, and is capable of remaining deployed in all weather conditions – its strength has been tested and proven in the field on board the Rowan Norway jack up rig since 2013.
The shutter guides are removable where skids are present, to allow the BOP to be installed on the BOP trolley. 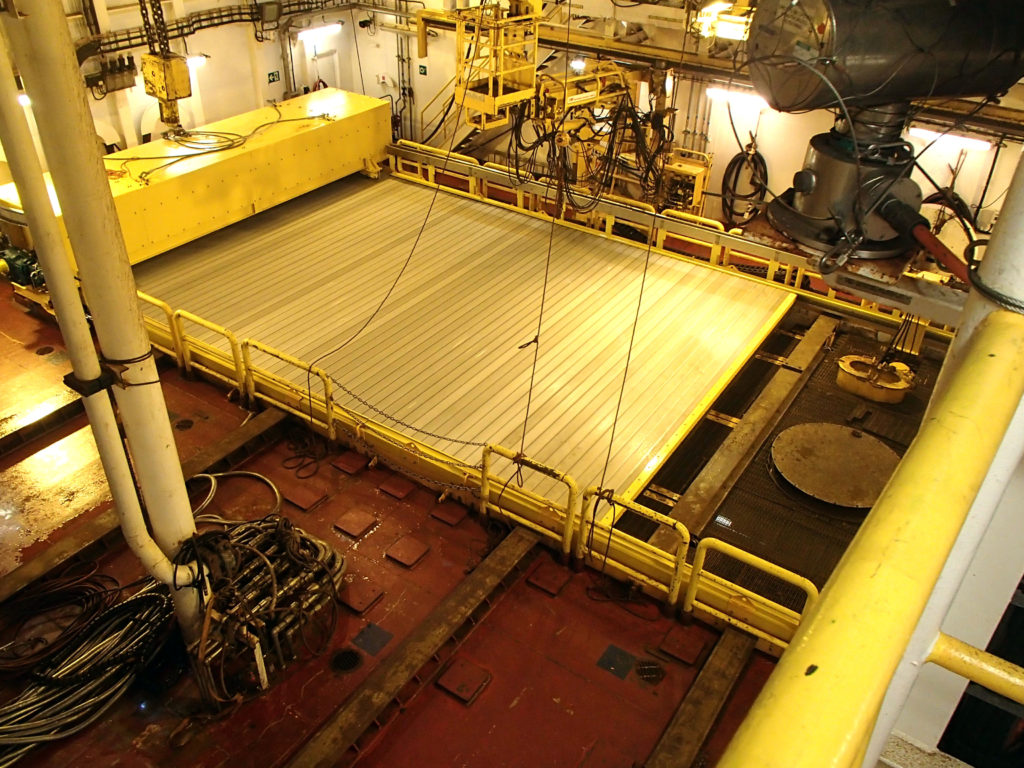 RollSafe deck has also recently been granted Mansafe approval by the DNV, for up to 3 men and a toolbox to work on the deck while it is deployed.

The RollSafe deck has been granted Mansafe approval by the DNV